Youngsters fall at final hurdle, but prove the future is bright for Portuguese football

But while the U21 squad didn’t bring home the trophy that they had made us believe they could, the mere fact that they had Portuguese fans excited is hugely promising for the future.

It may have been the Dutch who pioneered the term “Total Football”, but it was the Portuguese youngsters who had that on full display – from back to front the Portuguese were relentless in their closing down of opponents, and every player looked comfortable receiving the ball in tight spaces and carrying it forward.

At the back, goalkeeper José Sá and his now-trademark beard were phenomenal all tournament. Sá’s heroic saves kept out everything but one single goal, keeping four clean sheets in five tournament games.

Just ahead of him, centreback pair Tiago Ilori and Paulo Oliveira put on a clinic of how to build from the back. Both were composed in possession and intelligent without it. Raphaël Guerreiro and Ricardo Esgaio both look like extremely modern fullbacks, delivering a creative outlet as they marauded up and down the flanks.

It was in midfield where Portugal truly shone brightest. Rui Jorge’s midfield diamond dominated games, allowing Portugal to control possession and enforce their style on the opposition.

The two central midfielders, Sergio Oliveira and Joao Mario, did a brilliant job of facilitating the play by moving the ball, and themselves, quickly around the pitch to maintain control and probe for cracks in the opposition. 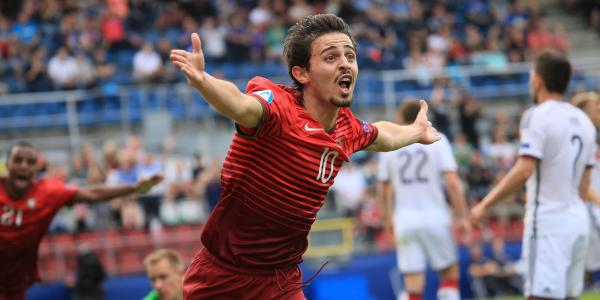 But it was at either end of this diamond that the greatest quality was on display, with two of the tournament’s standout performers fulfilling these roles in the Portuguese midfield.

At the base was William Carvalho, the player with arguably the biggest reputation (unless you include Harry Kane’s fanfare with the British media) of anybody in the entire tournament.

William, officially voted the best player of the tournament, is the ultimate destroyer; the burly Sporting youth product is an unbeatable presence in front of his back four. He sees the ball, he wins the ball, he passes the ball – he truly makes it that simple. In an almost nonchalant style, William takes control of the ball and effortlessly carries it up the field. He’s strong, smart and deceptively good with the ball at his feet.

He came into the tournament with a huge reputation and, despite his penalty miss, leaves with even more evidence that he is ready to make the step up to not only Portugal’s senior side, but also a big European club.

William has been a hot commodity for years, but in terms of growing reputation, nobody in this tournament soared higher than the player sitting at the opposite end of the diamond – attacking midfielder Bernardo Silva.

Fresh off a breakthrough season with French side AS Monaco, Bernardo Silva will have caught the eye of a horde of European scouts.

The fleet-footed playmaker was at the centre of everything that Portugal created. In fact, the entire team was set up around getting the ball to him. Deployed in a “false nine” role with two wide forwards ahead of him, Bernardo was tasked with being the prime creative outlet for his side – and he did so brilliantly.

The Portuguese No. 10 glides around the pitch, popping up in key areas and threading passes through to his supporting cast. His work ethic is impressive for somebody in such an advanced area of the field, and he contributes just as much in defense as he does in attack – which is no mean feat, considering he was the standout creative player in the tournament.

Even in such an impressive team, Bernardo Silva was clearly the crown jewel.

Bernardo’s ability, and that of his teammates, is something for Portuguese fans to look forward to seeing at the senior level. Many of these players have already made a handful of appearances for Fernando Santos’ Seleção, and this tournament will have done their chances of adding to their tally no harm.

It’s been made abundantly clear over the last few weeks that Santos is sitting on a goldmine of talented youngsters, and his priority should be bringing this crop of players into the senior team as soon as possible.

They may have fallen just short of bringing home the prize, but the biggest test for these rising stars will come in the form of much more important silverware.

It’s great for Portuguese fans to see that there will be life after Cristiano Ronaldo hangs up his boots, but if Portugal are genuinely on the brink of another “Golden Generation,” this one will need to make sure that, when it really counts, they can go the extra mile.

If the level of talent they displayed at this summer’s U21 European Championships is anything to go by, however, Portugal could be bringing home their first international trophy sooner rather than later.

This entry was posted in Club Football. Bookmark the permalink.

2 Responses to Youngsters fall at final hurdle, but prove the future is bright for Portuguese football