The weekend kicked off with Louis van Gaal’s fourth shot (including the devastating cup defeat to MK Dons) at claiming his first competitive win as a Manchester United manager – and no, winning pre-season tournaments don’t mean anything. But as United ventured into their third game of, statistically, the easiest start of any team in the Premier League, they once again came up flat.

Record signing Angel di Maria was the new star on show, and the midfielder found himself at the centre of everything that United did. He was even literally at the centre, with Van Gaal opting to play him in the middle of his increasingly stubborn 3-4-1-2 experiment.

But flashes of brilliance and quality from Di Maria weren’t enough to inspire United, and a resilient Burnley gained an extremely deserved point when the final whistle sounded. 0-0. Another game without a win.

The result prompted yet more spending from United, and deadline day deals saw them wrap up the signings of Van Gaal’s Dutch compatriot Daley Blind and mega-money loan signing Radamel Falcao. Blind’s acquisition makes perfect sense – the versatile defender can play along a back five, and also deputize in centre midfield. Falcao makes considerably less sense. Rooney, Van Persie and Mata will be looking over their shoulders – one of them will likely make way for the Colombia striker.

United’s spending spree has yet to bear fruit, and it remains to be seen just how long it will take for LvG’s favoured formation to click – if it ever will. 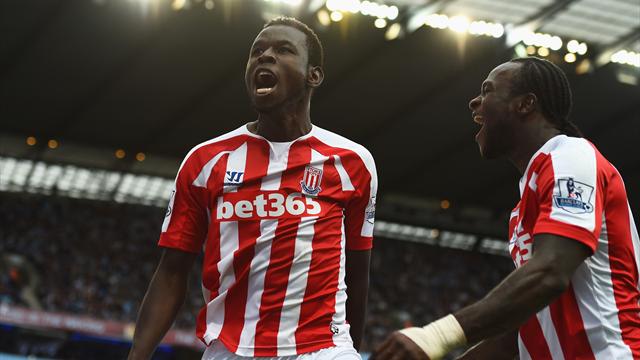 The other half of Manchester didn’t fare much better. After beating Liverpool, last season’s runners-up, in a relatively comfortable 3-1 win, Manchester City were expected to maul Stoke City and make it three wins on the bounce.

But in Stoke, former Manchester City manager Mark Hughes got the ultimate revenge. A goalless first half was worrying for Pellegrini’s men, who welcomed back Sergio Aguero for his first start of the season. But the Argentine was unable to continue his so far incredible goalscoring feats, and it was Stoke City who took the lead shortly after the break.

Less than 15 minutes after the break Mame Biram Diouf picked up the ball in his own half and went on a mazy run, beating City’s entire back line and squeezing the ball under an unimpressive Joe Hart – Stoke City led at the Etihad. And the Potters would hold out for the win, claiming an unexpected three points.

Still evidently sour at being sacked from City, Hughes was all smiles as he came back to haunt his former employers. Hughes aside, City will be devastated to have lost this, and their usually outstanding home record could come under some pressure if they continue to play as they did against Stoke. Do the all-powerful Manchester City have a chink in their armour?

But while the Manchester Clubs stumbled, Chelsea soared.

A first-minute opener at Goodison Park from Diego Costa continued the Spaniard’s streak of scoring in every Premier League game, and two minutes later Branislav Ivanovic doubled the lead. Inside three minutes, Everton were 2-0 down at home to Mourinho’s title challengers. Mirallas pulled one back on the stroke of halftime, but nobody expected what came next.

An explosive second half saw six goals as Everton and Chelsea traded punches – five of those coming in an incredible 10-minute period. The reborn Steven Naismith scored yet again for the Toffees, and Samuel Eto’o opened his Everton account with a goal off the bench against his former club. But even with their strikers firing, Everton were unable to contain the Blues.

Matic and Ramires each chipped in with a goal, but it was Diego Costa who grabbed the headlines when he scored in the dying seconds. Four goals in only three Premier League games for Chelsea – are you watching, Fernando Torres?

In Costa, Chelsea finally have a reliable goalscorer, and the effect on the team is clear as day. If he can continue putting the ball in the back of the net, and if fellow Spaniard Cesc Fabregas keeps creating chances, it’s hard to look past the striker to claim the golden boot this season – and even harder to look past Chelsea winning the Premier League title.

Defeat to Manchester City the previous weekend knocked Liverpool back down a few pegs. After losing Luis Suarez, the Reds had managed to beat Southampton (just) on the opening day. But when they came up against last season’s champions, they were punished for not taking their chances. A loss to next-up Tottenham would be devastating – leaving Rodgers with only three points from three.

But thankfully for the Anfield faithful, Tottenham were reminded just how good Liverpool now are.

All eyes were on new signing Mario Balotelli, but it was emerging star Raheem Sterling who gave his side the lead after brilliant play from Daniel Sturridge and Jordan Henderson gave the youngster the opportunity to score an 8th-minute goal. Joe Allen drew a (soft) penalty just after half, and the imperious Gerrard was on hand to slot home, as usual.

The best was saved for last: Newly-purchased leftback Alberto Moreno dispossessed Andros Townsend, before running 60 yards and smashing an unstoppable low shot past the outstretched Hugo Lloris. It was the type of fullback play that Liverpool have been missing for far too long; perhaps the type of play that can elevate the Reds to the next level, even in the absence of Suarez.

Liverpool have now hit fourteen unanswered goals past Tottenham, and while the game could have proven to be a stumbling block for the Reds, the performance (even more so than the result) instead served as a message to the rest of the league. Liverpool are not competing with Tottenham and Everton, and probably not even with Manchester United. Liverpool of last year was not just a flash in the pan. Liverpool, spearheaded by the extraordinary Raheem Sterling, are one of the big boys now.

Chilean superstar Alexis Sanchez opened his Premier League goalscoring account against Leicester City, but an instant reply from the foxes saw them hold Arsenal to a 1-1 draw. The Gunners have yet to look anything close to convincing in their five games (including their Champions League playoffs) so far, and their lack of potency prompted Arsene Wenger to splash £16 million on former Manchester United striker Danny Welbeck. It remains to be seen whether Welbeck is the solution to Arsenal’s problems.

Newcastle and Crystal Palace went head to head in a 3-3 goalfest at St. James’ Park. Defenders Daryl Janmaat and Michael Williamson scored for the Toon, while a brilliant goal from Jason Puncheon and an injury-time goal from the returning Wilfried Zaha helped Palace secure a point.

Charlie Austin’s first Premier League goal secured a vital three points for QPR, who picked up their first win of the season as they hosted Gus Poyet’s Sunderland, who, despite a fantastic performance to deny Manchester United last match day,  are still searching for a win.

Southampton continued their promising new era with a 3-1 victory away at West Ham. The Saints followed up an impressive performance opening day against Liverpool, and a draw last match day by claiming their first three points of the season. It bodes well for Ronald Koeman, who looks to have his Southampton project well on track.

First half goals from Gabi Agbonlahor and Andreas Weimann inspired Aston Villa to a 2-1 home victory over Hull City. Nikica Jelavic scored a late goal to put the Tigers back into it, but Paul Lambert’s Villains held on the claim the win.

Swansea are joint-top of the Barclay’s Premier League (yes, you read that right) after an impressive 3-0 victory over West Brom.

Nathan Dyer netted a brace, and Wayne Routledge scored a screamer, but it is the re-signing of Gylfi Sigurdsson that looks to be the ace in Swansea’s deck – the Icelandic midfielder assisted both of Dyer’s goals to take his tally to one goal and four assists in Swansea’s opening three games. Look out Fabregas, there may be a new midfield maestro in town.

Speaking of Fabregas, the Swans take on co-leaders Chelsea this coming weekend. Surely they won’t still be top of the league afterwards…right?