World Cup Day 14: Shaqiri and Messi star as Switzerland and Argentina go through

For the Argentines, progress to the knockout rounds was already sealed, but a win or draw against Nigeria would guarantee top spot.

Nigeria knew that a win or draw would put them through as well, but even a loss could be good enough if Iran failed to beat Bosnia in Group F’s other match.

Messi put his stamp on the match early when he pounced on a rebound to smash the ball into the roof of the Nigerian net with 3 minutes on the clock to give Argentina control of the match.

But within 60 seconds Nigeria had pulled level – winger Musa picked up the ball at the top of Argentina’s box and unleashed a fantastic curling shot that flew past the outstretched Romero and nestled in the corner of the Argentinian goal. What an incredible start.

The game fizzed out after the rapid start, but yet another moment of magic put Argentina back on top.

It was Messi to the rescue once again; with the last kick of the half, the superstar curled an unstoppable free kick past a stunned Vincent Enyeama – his fourth of the tournament so far, taking him joint-top with Neymar.

The second half kicked off, and the game came to life right away. If Messi was on form, so was Musa – the attacker received a pass just outside of the box, drove in and finished calmly to bring the game level.

But the action just wouldn’t stop. Only three minutes later and Argentina were on top for the third occasion in the match.

Defender Marcos Rojo got the final touch on an Argentina set piece, turning in his first ever goal for his country to all but seal first place in Group F.

It ended up being the decisive moment in an incredible match – Argentina held on for the 3-2 victory and top spot in the group.

But the day’s other result meant that Nigeria’s admirable effort was also rewarded with progression. Iran’s failure to beat Bosnia left the Nigerians in second spot, with a place in the next round.

The big story though, is Lionel Messi and Argentina. They’ve qualified in first with three one-goal victories, it’s the desired outcome, but the road to progression was expected to be easier.

But they’ve still come through unscathed, and they (Messi in particular) look to be picking up steam. If they continue to improve, this World Cup could be Messi’s defining moment – hoisting the trophy would cement him as the greatest player of all time. 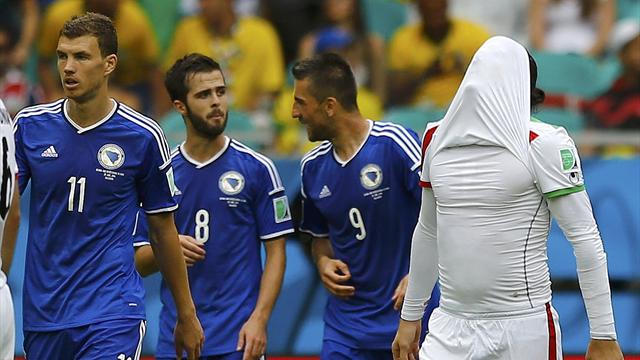 In Group F’s other match, already-eliminated Bosnia took on an Iran side with a very slim chance of claiming the group’s second spot.

Bosnia were expected to qualify from the group, but they were officially eliminated on Saturday when they fell to a controversial 1-0 loss to Nigeria – their second loss in two games, sealing a disappointing exit for Dzeko and co.

They came up against an Iran side facing a bizarre scenario. Despite being the only team left in the World Cup to score a goal, Iran still had a slim chance to advance in second place.

But that chance slipped farther away when Bosnia’s Edin Dzeko opened the scoring in the 23rd minute – the striker struck a left-footed shot hit the post before going in to give him his sixth goal in his last eight international games.

And after half time, Iran were delivered a heart wrenching blow to all but end their World Cup when Miralem Pjanic seized upon a defensive error to give Bosnia a two-goal lead.

Reza Ghoochannejhad pulled one back for Iran in the 82nd minute, scoring their first goal of the tournament to give them a glimmer of hope, but it was shredded when Bosnia’s Avdija Vrsajevic restored the gap only a minute later.

It was a bittersweet ending for Bosnia – they finally got their first ever World Cup win, but it was all for naught.

For Iran, it was the case of a missed opportunity – their inability to score goals meant that although they’ll be disappointed to be going home, they can’t say they don’t deserve it.

France came into their final Group E game against Ecuador knowing that barring a heavy loss, they had first place in the group all but tied up.

For Ecuador, it was do-or-die. The Ecuadorians needed to match Switzerland’s result in their simultaneous game against Honduras; they knew that they’d be hard-pressed to get anything out of France, so they had to hope that the Swiss would drop points.

In the opening exchanges, Ecuador contained the French better than anyone has so far this tournament – Enner Valencia and his teammates kept their opponents at bay, while also threatening on the counterattack.

But although the half came to a close with a satisfying 0-0 score line, Ecuador soon learned that Group E rivals Switzerland came into their break with a two-goal lead. Ecuador needed to score in the second half.

They faced a monumental task – one that became almost impossible after a red card to winger Antonia Valencia left the Ecuadorians with a man down, needing a goal against arguably the tournament’s best side so far.

Credit must go to Ecuador though; despite being down to 10 men, they maintained their intensity and gave the French a good challenge. Especially as the game went on, the two teams fought an end-to-end, exciting battle.

Alas, it wasn’t meant to be for the Ecuadorians. The game ended 0-0, and a Swiss victory elsewhere meant that Ecuador would be going home heartbroken.

But for the French, they come out of this group with their heads held high. Despite being a historic power in football, nobody was talking about them much prior to this tournament.

That has changed drastically.

Now, France looks head and shoulders above most teams at the World Cup, and Les Bleus are amoung the favourites to fight for the fabled trophy.

Their fantastic form so far sets them up with a next round match against Nigeria – one that manager Didier Deschamp’s men are huge favourites to win.

If they keep playing the way they have so far, it’ll take something incredible to topple them.

In Group E’s other match, the Swiss came up against the whipping boys of the group, last-placed Honduras.

Switzerland were in a nerve-wracking scenario: even if they won today, they could still get knocked out if Ecuador could match their result against France.

They needed the French to do them a favour – but first they had to hold up their part of the bargain.

And they did so.

In only the 6th minute, Swiss youngster Xherdan Shaqiri, their expected star of the tournament, finally got off the mark. He cut onto his lethal left foot and smashed in a spectacular goal to give his country a vital lead.

The muscular winger had to wait three games to grab his first tournament goal, but only 25 minutes later, he added another.

This time, it was rising star Josip Drmic who provided the pass – the striker put Shaqiri through on goal, and he slotted in his second goal of the half.

It was a productive first half, and the Swiss took their two-goal lead into the break to be informed of even more good news. Ecuador was tied with France; as it stood, Switzerland were through.

They sealed their victory with a third goal after the break. It was that man Shaqiri once more, as the winger linked up with Drmic again to fire in low and claim his hattrick.

A fantastic result was made even better by the score of the other game – Ecuador had tied, so Switzerland would advance through Group E in second place.

Progression will bring joy to the Swiss; they’ve put a cherry on top of their phenomenal qualification to this tournament by advancing to the knockout rounds.

Their celebrations must be short-lived, as they must now prepare for an incredibly tough challenge against a Messi-inspired Argentina in the next round.

However, Switzerland have currently outscored Argentina’s “deadly” offence at this tournament, and in a much harder group, too. If they can keep Messi out of the game, and if Shaqiri can keep firing, they could surprise a few people.