Day five started with a game touted as one of the tournament’s most salivating prospects – Germany and Portugal would collide again in a battle for supremacy.

It was certainly Germany’s day.

Just 10 minutes into the match, referee  Milorad Mazic awarded Germany a (somewhat weak) penalty when Joao Periera and Mario Götze came together in the box. Golden boy Thomas Müller converted the penalty, and from that moment, Portugal were facing an uphill battle.

Twenty minutes later, Germany doubled the lead – this time it was Mats Hummels who powered in a header to put Germany into a commanding position. It was not looking good for Portugal.

But the Portuguese weren’t content to just let Germany beat them – they had to implode as well. Just five minutes after Hummels’ goal, Portuguese defender Pepe, upset that Müller had made the most out of a collision between the two, leaned down and put his face right against Müller’s. The referee deemed it a headbutt, Pepe was sent off and Portugal were down to 10 men – this was a side in self-destruct mode.

Müller made the most of a defensive error right before half, and with the game winding down, he scored yet again to complete a hattrick and leave the Portuguese embarrassed.

For Germany, it was the perfect day. Complete control and an easy 4-0. For Portugal, the sooner they move on the better. The Portuguese can’t dwell on this – the result and performance leave much to be desired, and improvement must be necessary. Big games against the USA and Ghana are ahead.

It just had to be this game, didn’t it?

After four and a half days of brilliant World Cup action, Nigeria and Iran finally broke the trend when the two nullified eachother to battle out a 0-0 draw, claiming one point each and the title of the World Cup’s only boring match.

Of the two, Nigeria were clearly the superior team. The Nigerians were dominant in possession, and had four shots on target (compared to only one from Iran).

After a poor showing from both teams, Bosnia and (especially) Argentina will be itching to beat up on both Iran and Nigeria. Improvement is needed, otherwise both will crash out of this.  This draw will probably be the only point that either of them picks up now. 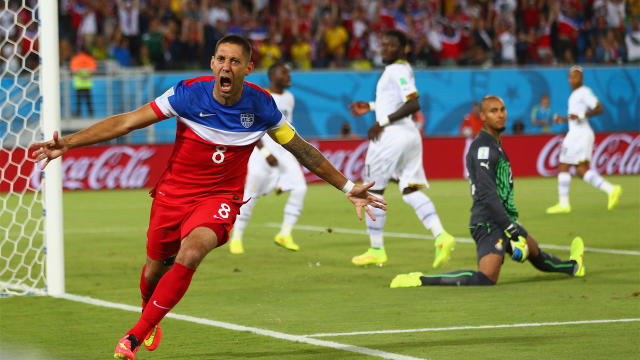 This game quickly made up for the earlier snooze fest.

Within 32 seconds of play, Clint Dempsey went on a mazy run and slotted the ball into the back of the net. USA 1-0 Ghana, easy as that.

After the goal however, Ghana looked a better side. Their lack of crossing ability meant that they weren’t creating as many quality chances that they would have hoped for, but they attacked with more intent than the USA.

A first half injury to Jozy Altidore dampened American spirits, and an 82nd minute goal from Andre Ayew looked to have completely spoiled the American party.

But it was the USA who had the final laugh – only four minutes after the Ghanain equalizer, defender John Brooks connected with a header off a corner kick to power the ball into the back of the net. Lead restored, three points clinched. USA 2-1 Ghana.

This was a massive game for both sides – with Portugal losing heavily to Germany, the winner of this game could control their World Cup destiny.

But the USA shouldn’t celebrate quite yet; Portugal are always best when they’re backed into a corner, and the Portuguese (when playing like they can) are a level ahead of what Ghana and the USA can do. Group G is living up to it’s billing after all.

One stinker, but World Cup still exciting as ever

Despite being the day with the only draw of the tournament, Group G’s two matches provided drama and excitement.

Another clash of the titans resulted in another dismantling, and the World Cup rolls on.