What a World Cup this is shaping up to be. Day 3 provided great action once again, with a dramatic comeback, a clash of titans and a shocking upset.

Greece have become infamous for their defensive football, but it didn’t take long for Colombia to force them to come out of their shell.

Wideman Pablo Armero scored with just five minutes on the clock, a goal that meant that Greece, who would have become more and more defensive the longer the game remained level, had to come out and attack if they wanted anything from the match.

It resulted in a close game (making you wonder why the Greeks don’t attempt to play progressively more often), but a 58th minute goal from Teo Gutierrez, the man tasked with picking up the goals in the absence of Falcao, put the game out of reach.

It was fitting that the game’s best player, James Rodriguez, grabbed a final goal to put the nail in Greece’s coffin with only seconds remaining. Rodriguez put in one of the best creative displays of the tournament so far, picking up the ball in midfield and driving through the heart of the opposition, slicing them open with precise passing. He will be one to watch this summer.

England, Italy and Uruguay – Group D was hyped up as this summer’s Group of Death. Nobody gave any thought to the underdog, and Costa Rica provided perhaps the surprise of the tournament.

Despite an early penalty goal from Uruguayan striker Edison Cavani, the Costa Ricans fought back incredibly, scoring twice in quick succession before adding a late goal to seal an incredible victory for the underdogs.

Uruguay’s Maxi Pereira also picked up a red card (which could have a big impact on Uruguay’s back line for the next match) but the story here was the lack of an appearance from Luis Suarez.

Uruguay’s talismanic superstar watched the entire game from the bench, which makes you wonder just how close to full fitness he actually is. With Uruguay trailing, you would think that if Suarez was anywhere close to being fit, then his country would take the risk and bring him on.

With Uruguay now looking up from the bottom of Group D, they could be in big, big trouble. Suarez simply must play in their next two crucial matches, and his country will need to brush off this result and play to the best of their ability. 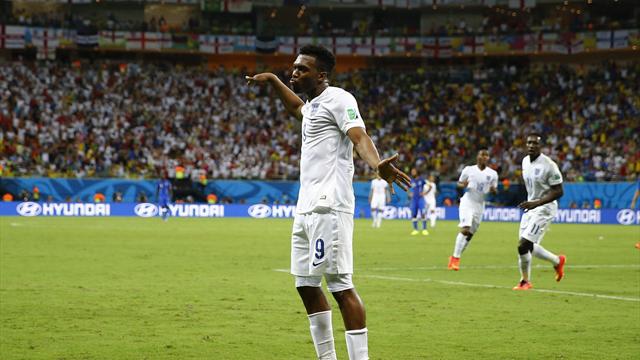 Going into the game, the entire English media were concerned about the game plan from manager Roy Hodgson – the former West Brom manager typically played England in a 4-4-2, setting up two defensive banks of four and playing a generally defensive style of football.

And with the Italians being renowned for their defensive qualities, many people saw a bore-fest in the making with this match. They couldn’t have been any more wrong.

England came flying out of the blocks, with youngster Raheem Sterling in particular looking threatening. A 35th-minute goal from Italy’s Claudio Marchisio was actually against the run of play, but English striker Daniel Sturridge equalized within two minutes thanks to fantastic passing by Sterling and Wayne Rooney.

Shortly after half, Mario Balotelli scored a header to put the Italians in front Afterwards, Italy controlled most of the game. Despite England taking more shots, the Italians were content to pass the ball around and slow down the tempo.

The result ended up in Italy’s favour, but England fans were treated to an attacking display that they haven’t seen for some time. It seems that this crop of players is so good that even Roy Hodgson can’t force them to defend.

The day’s final game saw Japan take on the Ivory Coast in an extremely fascinating battle. Both teams were fighting for a grip on the group’s second spot (Colombia look favourites to win it), and this game proved to be a close encounter.

It certainly was – a Japanese opener, a rifle from Keisuke Honda, gave them the lead going into half time. The 62nd minute saw the introduction of iconic striker Didier Drogba, and his presence changed the game immediately.

Drogba gave the Japanese defenders yet another physical presence to be occupied with, and only two minutes after his introduction strike-partner Wilfried Bony headed in a cross from rightback Serge Aurier. Two minutes later, and another Aurier cross met the head of Gervinho, who gave the Ivorians the lead.

Drogba’s introduction made the difference in a tight game between two exciting teams, but Serge Aurier must also be given credit for his two fantastic assists. Aurier is one of the most exciting young defenders in the tournament, and with teams already looking his way prior to the start of this World Cup, it’s safe to say he will have a long list of suitors by the end of it.

What a day of action

Another day gone, four more excellent matches. World Cup 2014 is quickly wiping World Cup 2010 from our memories. The goals are flowing, the upsets are frequent and the comebacks are salivating – this is the World Cup we’ve been waiting for, long may it continue.