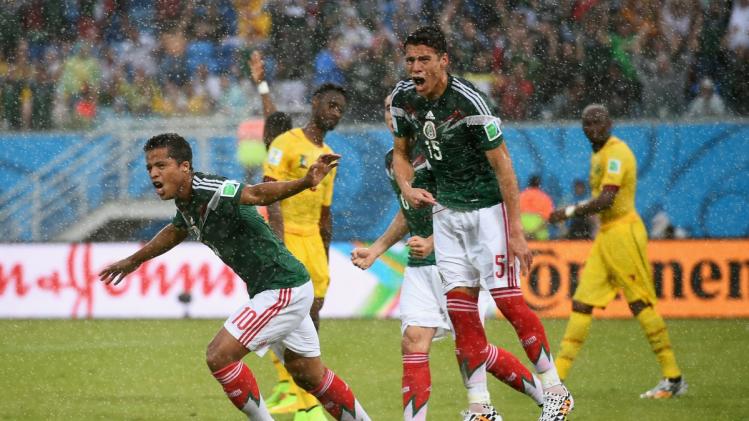 The day started with a Group A clash between Mexico and Cameroon. After Brazil’s victory over Croatia yesterday, both teams were gunning for a win that would see them gain a foothold in what will be an interesting three-way fight for second place.

Refereeing controversies were present yet again (sort it out, FIFA) as Mexican forward Giovanni Dos Santos scored two brilliant goals, both of which were incorrectly ruled offside. The game went into half time level, despite Mexico fully deserving to be leading.

Eventually, the Mexicans were rewarded for their fantastic attacking football – Dos Santos (who was the best player on the field today) had his effort saved by Cameroonian goalkeeper Itandje, only for the ball to be spilled back out into the path of Oribe Peralta, who obliged by slotting the ball home.

The game ended in a deserved 1-0 victory for Mexico; a result that creates an interesting match-up between Mexico and Croatia for advancement to the knock-out rounds.

In a repeat of the 2010 World Cup final, viewers were treated to an early “clash of the titans” as the Netherlands and Spain battled in the opening game of Group B.

The game started in characteristic fashion – Spain were superb with the ball, dominating possession and controlling the tempo of the match. Their early superiority resulted in a (somewhat weak) penalty, duly converted by Xabi Alonso. At that point, many thought it to be game over – Spain, so good at holding the ball and sucking the threat out of opponents, would hold the Netherlands at bay.

But on the stroke of halftime, Robin Van Persie gave his country an important equaliser against the run of play with a stunning lobbed header over a stranded Iker Casillas. What followed will go down in history as one of the best matches (and biggest shocks) that the World Cup has ever seen.

The Netherlands came out in the second half absolutely flying – the Dutchmen were relentless, constantly harrying Spain in a refreshing display; a lesson on just how to beat the reigning champions.

Four sensational second half goals, including a brace from Arjen Robben, condemned the Spanish to a 5-1 loss, sending shock waves through the football world. Spain, who only conceded a combined four goals between the last two major international tournaments, had just conceded five in a single group match. The world was turned upside down.

This was the statement that the World Cup needed – anything can happen and anybody can win this damn thing.

In the day’s final game, Chile went into the match knowing that Spain’s staggering slip provided an opportunity for Chile to go into next week’s game against the Spaniards with three points in the bag, in control of their World Cup destiny.

Barcelona star Alexis Sanchez showed why he is so highly coveted this summer with a clinical finish just 12 minutes into the game, and Sanchez was at it again just two minutes later – this time, the skillful forward turned provider, playing a precise pass to Jorge Valdivia, who finished with aplomb.

Australia fought back admirably: the Socceroos gave Chile problems with their direct football and their physical presence, and veteran Tim Cahill sent a towering header into the top corner to pull one back for his country.

But the match belonged to Chile. A late piledriver from substitute Jean Beausejour sealed a 3-1 victory for the Chileans.

Goals and controversy were present yet again, but the World Cup put on three more matches to be proud of.

The second day of the World Cup was, above all, another fantastic advert for the beautiful game. Three exhilarating games captivated audiences around the world. This is what a World Cup is all about.