The 2014 FIFA World Cup officially opens when Group A spurs the tournament into life, and with host nation Brazil in the group, things will get very interesting, very fast.

The Samba stars will be pitted against Croatia, Mexico and Cameroon, and the World Cup’s first group will provide viewers with extraordinary atmosphere. When Brazil plays, the world watches.

Here are your Group A competitors:

Since last winning the World Cup in 2002, Brazil have been fairly disappointing in international tournaments.

Perhaps the team has failed to cope with the pressure of previous generations of Brazilian superstars, or perhaps they simply haven’t had the right group of players since – but regardless, Brazilians expect more from their national side.

With superstars all over the pitch, Brazil will be confident of turning heads this time around. From powerful centreback Thiago Silva to the explosive presence of Hulk, the men in yellow and blue will certainly progress through the tournament in style.

After an impressive 2013 Confederations Cup, the team, managed by World Cup 2002 winner Luiz Felipe Scolari, looks to finally be on the right track.

And with the World Cup in their own backyard, the Samba Kings are sure to come into this tournament breathing fire.

Player to watch: Channelling the power of Brazil’s fleet-footed legends, Barcelona star Neymar will be the focal point of Brazil’s attack. With nine international goals already, the 22-year-old bag of tricks will carry his country’s expectations on his shoulders.

Predicted group finish: First place. With an array of world-class talent, the Brazilians should prove to be too much for their competitors. It will be interesting to see whether the intense atmosphere can propel them all the way, or if the pressure will be too much to handle.

Predicted overall finish: With home advantage all tournament, Brazil should revel in the atmosphere. With a side packed full of talent and a manager who knows how to use them, the Brazilian fans will be expecting at least a place in the semifinals – and if they build up momentum, they might just win the whole thing.

After missing out on qualification to the 2010 World Cup, Croatia are back and ready to show the world that they, too, have a talented squad.

They edged their way in this time – it took a 2-0 aggregate win over Iceland in the playoff round to seal a World Cup birth for the Croatians.

Despite not being a major footballing power, Croatia quietly has a very handy squad, boasting players from some of Europe’s top teams. In midfield, they have the imperious Luka Modric, from Real Madrid, and up top they have hitman Mario Mandzukic of Bayern Munich.

Croatia’s star players are starting to achieve club success and receive recognition from fans all over the world, and with proven quality from back to front, Croatia could surprise a few people this summer.

Player to watch: Despite a few talented youngsters (such as Mateo Kovacic) looking to make their name, it will be down to Croatia’s supremely talented Luka Modric to make the difference for his country. After an excellent year under Carlo Ancelotti at Real Madrid, Modric must continue his form and dominate the midfield for Croatia.

Predicted group finish: Second place. Brazil will be running off the high of hosting the tournament, but Croatia will prove to be no slouches. They may not pip the Brazilians to top spot, but with their solid core of players, Croatia should be able to advance.

Predicted overall finish: Although progression from Group A is fully achievable for Croatia, they are likely to progress any further. Should they progress in second place from this group, they’ll meet the first place team from Group B (likely Spain) and this will spell elimination. 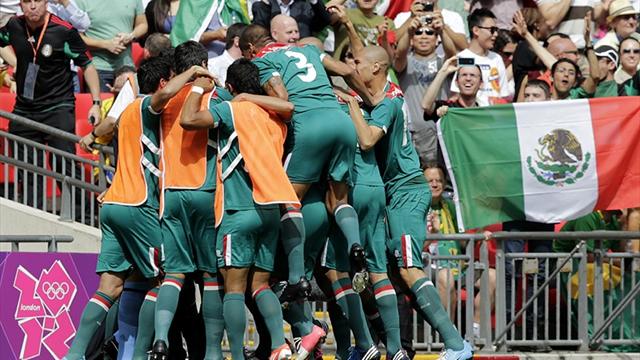 Despite being seen as one of the powerhouses of the CONCACAF footballing body, Mexico teetered on the line of World Cup qualification, and just barely came out on the other side.

After a fourth place finish (out of six teams) in the final round of CONCACAF qualifying, Mexico were forced into a playoff tie against New Zealand: they rose to the challenge, and now find themselves in an interesting World Cup group.

The Mexicans will be somewhat of a surprise package; with most people not paying much attention to Mexican football, a squad containing a majority of domestic-based players will be able to spring a surprise or two – if they’re capable of it.

But you can always expect exciting football from Mexico. Regardless of who they call up, El Tricolor will play with flair and bravery.

Player to watch: With many of their talent coming from their domestic league, many fans of world football will be watching for one player that they know well – Giovani Dos Santos. The 25-year-old Mexican winger has dazzled for Spanish side Villarreal this season, and his incredible goal against the United States in the CONCACAF Gold Cup final will be ingrained in the minds of football fans everywhere.

Predicted group finish: Third place. If Mexico brings their absolute best, they could challenge for second place in the group, but it will certainly not be easy. They’ll bring plenty of pride, but will likely fall short of progression from Group A.

Cameroon qualified to this summer’s World Cup with relative ease, progressing easily through CAF’s Group I before dismissing Tunasia 4-1 (on aggregate) in the final stage of qualifying.

Les Lions Indomptables (The Indomitable Lions) are actually Africa’s most frequent entry to the FIFA World Cup – they have qualified a record seven times for FIFA’s elite tournament.

Despite that, Cameroon have only ever progressed from the group stages one single time, and with a group containing the aforementioned teams, they are unlikely to pose a serious threat.

With star players Samuel Eto’o and Alex Song playing bit-part roles for their club teams, Cameroon will be looking for others to step up. It’s a tough ask for the African side, and barring something spectacular, they are unlikely to pull up any trees.

Player to watch: A couple of Cameroon’s traditional superstars are out of favour in club football, but with German-born Joël Matip, the team has a genuine talent to rely on. The centreback opted to represent Cameroon internationally, and they will reap the rewards of his composure and intelligence.

Predicted group finish: Last place. As previously mentioned, Cameroon have only ever progressed from the group stage once. Key players out of form means that they aren’t likely to change that record.